This week, we discuss a recent meta-analysis by Kowalik et al, which will also be input to a live Twitter journal club / chat. If you would like to join or just want to read the comments, have a look at #traumaresearch on Thursday February 23rd 10pm GMT (= 5pm New York, 23h Amsterdam, Friday 9am Melbourne).

Cognitive Behavioral Therapy (CBT) is probably the most used, or at least most recommended, treatment for children with Posttraumatic Stress Disorder (PTSD). As I am quite fond of systematic reviews and meta-analyses, the new meta-analysis on the efficacy of trauma focused CBT by Kowalik and colleagues quickly grabbed my attention. Although (and because?) I have a few critical questions regarding the publication, I think it merits attention from researchers and clinicians.

CBT is a psychological treatment that addresses ‘associations between stimuli and conditioned fear responses, the influence of environmental factors on symptom expression, and cognitive and affective regulation.’ Cohen and colleagues, who have developed trauma focused CBT, use the PRACTICE acronym to describe its elements. It requires a little bit of fantasy (two P’s!) and it seems to have changed slightly over the years but it gives a succinct overview: 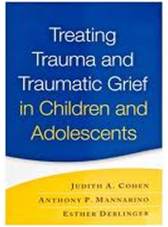 The purpose of the review by Kowalik et al. was to calculate an estimate of the overall efficacy* of CBT in the treatment of PTSD in children. Randomized controlled trials were selected if they compared CBT to an active control group (e.g., supportive unstructured psychotherapy, nondirective supportive treatment, and child-centered therapy). The authors used somewhat particular search terms: PTSD OR posttraumatic stress disorder OR sexual abuse. The latter was a surprise; why include sexual abuse explicitly but not violence, disaster, road traffic accident, traumatic bereavement, etc? It would be interesting to see whether those terms would result in additional studies and potentially different effect sizes.

CBCL as an outcome measure

The only outcome measure utilized with some consistency across studies turned out to be the Child Behavior Checklist (CBCL). The CBCL is a general scale for behavior problems in children, including composite scores for internalizing problems, externalizing problems, and total competency (i.a. social challenges, participation and school problems). It is not specific for PTSD. Moreover, there is some evidence that it isn’t a valid measure for PTSD. However, it does provide a general indication of child well-being and can be used as a relevant outcome measure.

Eight trials satisfied the selection criteria. Of interest is that five of these were by Cohen et al. or Deblinger et al., the developers of the trauma focused CBT protocol.

Evidence of efficacy of CBT?

The fail-safe N (i.e. the number of studies needed to overturn a significant effect) was 4 studies for total problems and internalizing scores and 0 for externalizing problems. Although the authors argue that this provides strong evidence that CBT is effective, I am not completely sure. Is it enough for such a conclusion? In favor of the authors’ argument is the fact that the comparisons were with active treatment, not with a waitlist-control. On the other hand, the authors do not mention that all of the eight studies are on sexual abuse victims only. Instead, the title of the review implies it covers PTSD in general. In my view, they should have described this limitation.

CBT seems to better address internalizing symptoms such as anxiety and depression than it does externalizing symptoms such as aggression and/or rule-breaking behaviors according to the review. That does make sense, knowing that PTSD is predominantly an internalizing disorder. The authors suggest that a next step would be to deconstruct components of CBT. One very recent example has just been published online. Salloum and colleagues compared two conditions within a trauma and grief intervention for children: a focus on building coping skills only, or building coping skills + a trauma narrative (the C and T from PRACTICE respectively). Their findings suggest that the trauma narrative is not a necessity for symptom reduction, unless children have high levels of symptoms.

In general, the evidence of the effectiveness of CBT for children with PTSD is quite convincing and extending quickly (see e.g. Cohen et al. 2009). This review adds knowledge with regard to CBCL outcomes in trials that compared CBT to active treatment after sexual abuse.

What’s your view on the paper? And what should be studied next?